Journal of Natural Hazards and Environment

In recent years, the negative effects of climate change on water resources have been observed. Due to the decrease in precipitation in the Burdur Lake basin, there is serious volume loss especially in surface waters. In this study, basin drought analysis was performed using standardized precipitation index (SPI) and China Z index (CZI) methods. For this, precipitation data of 6 different meteorological stations located in and around the basin were used. In addition, the relationships between SPI and CZI indices are statistically revealed. In Burdur Meteorology station, it was determined that the longest drought period was experienced in the 24-month time scale with the SPI method since January 1951 with 1612 days. However, the most severe drought has been determined to have lasted 2250 days with a severity of 70.027 since January 1989. According to the drought analysis using the China Z index at the same meteorology station, the longest drought periods were 1553 days since January 1989, with a severity of 70.782. According to the obtained results, medium and mild droughts were detected around the Burdur Lake and south of the basin in 2019. In addition, the R2 values of both methods (0.96-0.98) are quite high and very close index values were calculated. 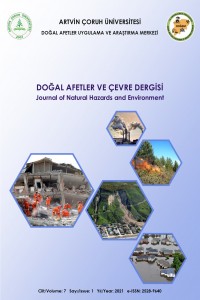 This journal is licensed under a Creative Commons Attribution-NonCommercial-NoDerivatives 4.0 International License.