The idea of protecting the nature and natural resources in order to prevent the damages caused by unconscious and uncontrolled use of the land pieces constituting the habitats increases the importance of land use planning. The region between Tarsus (Mersin) and Karataş (Adana) located in the Ramsar protected areas, including the Akyatan wildlife development area, which is one of the ecologically important natural conservation areas in the southern part of Çukurova is selected to be examined the land use changes between 1985, 2000 and 2019 in this study. Landsat-5TM 1985, Landsat-5TM 2000 and Landsat-8 OLI 2019 satellite images with a spatial resolution of 30 m were used in the analyzes. Pretreatment studies, which consist primarily of geometric, radiometric calibration and atmospheric arrangements, have been performed with satellite images. Spectral Angle mapping method was used for land use change detection. According to the results obtained, growth of 192%, 37%, 7% and 8% growth in settlement, non-cultivated agriculture, forest and semi-natural and lagoon / lakes areas between 1985-2019, and 43% and 21% in bare and cultivated agricultural areas Decreases in rates of 21 have occurred. It was determined that the settlements around the Karataş fault increased by 192% between 1985 and 2019. The accuracy of the controlled classification studies was evaluated with kappa statistics and calculated as 0,80, 0,84, 0,87 for 1985, 2000 and 2019, respectively. 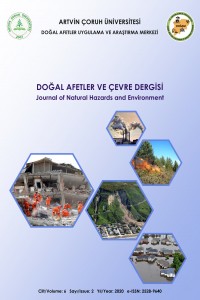