Drought is a natural disaster that adversely affects various sectors such as hydroelectric power generation, health, industry, tourism, economy, agriculture and animal husbandry. For this reason, monitoring, determining the spatio-temporal distribution, and managing drought risks by taking precautions are of great importance. In this study, it is aimed to map the spatio-temporal changes of various meteorological and hydrological droughts in the Euphrates Basin according to drought classes with Kriging, Radial Based Function (RBF) and Inverse Distance Weighting (IDW) interpolation methods and to evaluate the drought risk situation in the basin. For this, Standardized Precipitation Index, Statistical Z-Score Index, Precipitation Anomaly Index, Standardized Precipitation Evapotranspiration Index, Reconnaissance Drought Index and Standardized Runoff Index values were used for 16 Meteorology Observation Stations and 18 stream-gauging stations in the Euphrates Basin. As a result of the analyses, it has been determined that the Kriging method is the most effective method in predicting meteorological droughts in the basin, and RBF is the most effective method in predicting hydrological droughts. Since the drought risk level of the basin is determined to be high, it is recommended to make a drought management plan in the study area, to reduce negative drought effects, and to take early warnings and drought precautions. 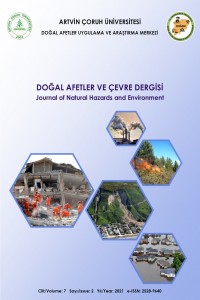