In this study, the change and trend of water surface temperatures of Lake Van has been investigated. For the period of 2016-2020; NASA-Day, NASA-Night satellite and measurement data obtained from the Turkish State Meteorological Service for 3 stations were compared. In addition, the monthly, the annual (minimum-average-maximum), the seasonal trend analysis of day and night long-term satellite data (2001-2020) and their significance levels were determined by the Theil-Sen and Innovative Trend Analysis. Measurement data covering for the period of 2016-2020 and NASA-Day, NASA-Night satellite data were highly compatible (R=0,94-0,99). NASA-Night water surface temperatures were found to be more compatible with measurement data than NASA-Day satellite data. NASA-Day and NASA-Night water surface temperatures covering for the period of 2001-2020 were found to be homogeneous at a 1% significant level. Water surface temperatures tend to increase both in the short and long term. The highest increase in monthly analyses (0,094 °C/year) was determined in June for NASA-Day and in April for NASA-Night (0,104 °C/year). The highest increase in seasonal analyses was seen in night data (0,080-0,099 °C/year) in the spring season. The average increase in long-term annual average water surface temperatures was calculated as 0,043 °C/year. It was concluded that this value is smaller than the increase determined for the Eastern Black Sea (0,11 °C/year), higher than the calculated for the Aegean and Eastern Mediterranean (0,055°C/year), approximately 1,5 times the increase determined for the South Caspian Sea (0,029 ± 0,009 °C /year) and about 4 times the increase (as 0,011 °C/year) for the oceans. 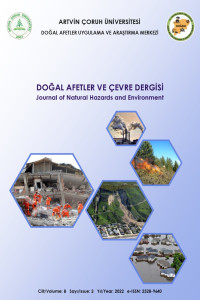